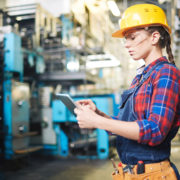 The world’s first book on MTConnect, an open and royalty-free interoperability standard and the application of open systems in manufacturing has been released and it is titled,  “MTConnect – To Measure Is To Know”.  Written by Dave Edstrom, CEO/CTO of MTConnect, the book discusses the many lessons learned in the world of open systems and the value this means to the manufacturing industry.

Dave Edstrom has spent over 35 years in the computer industry.  He helps the reader understand that MTConnect is not just an evolution in manufacturing, but that it is a revolution, a true game changer.  “MTConnect will be more important in the 21st century for manufacturing than CNC was for manufacturing in the 20th century” said John Byrd, former president of Association Manufacturing Technology, www.amtonline.org   (MTConnect: To Measure Is To Know. Ashburn: Virtual Photons Electrons, 2013. pg xiii).  MTConnect is making the dreams and desires of generations of manufactures possible.  Machine tool builders and manufacturing equipment providers alike all want to see the same goal of different devices having a common connection on the plant floor.  With MTConnect, anything is possible.

A few excerpts from the book:

“Only one to two percent of all shops monitor their shop floor.  The ability to know what is happening on your shop or plant floor anywhere, at anytime, is vital to the manufacturing process.  As a comparison, the next time you go in for a surgery, tell the surgeon that you want to save money and not monitor any of your vital signs.  Drop me a note and tell me what the surgeon tells you.  Then why is it that 98% to 99% of all shops don’t bother monitoring their shop floor?

“The process of standardization is always a political struggle with winners and losers.  The primary winners will be those companies that understand it is co-opetition (competition and cooperation) that drives thriving markets.  The primary losers will be those companies holding on to proprietary solutions at all costs.  With a standard screw, you could now have standard tools, standard assembly lines, and the growth of mass production.”
(MTConnect: To Measure Is To Know. Ashburn: Virtual Photons Electrons, 2013. pg 3.)

“If we look at the manufacturing companies that are embracing open thinking and open collaboration, these companies report secondary benefits in morale as their employees typically tell their management that they have a much higher job satisfaction.”
(MTConnect: To Measure Is To Know. Ashburn: Virtual Photons Electrons, 2013. pg 22).

Memex is mentioned in the acknowledgements

“Huge thanks to Dave McPhail, president of Memex Automation.  Dave is a great guy, and so is his business partner, John Rattray, who is the vice president of sales and marketing, as well as the whole Memex Automation team.  Thanks as well to Bob Hansen of R.C. Hansen Consulting for his help at [MC]2 2013 and educating me on OEE”
(Dave Edstrom, MTConnect: To Measure Is To Know. Ashburn: Virtual Photons Electrons, 2013. pg 209).

There is a paperback version that is available at Amazon.

DNC Software for Windows 7, Vista, Windows XP and others is a 32-bit multi-threaded communications & file management system allowing simultaneous upload and download to multiple CNC controls. It includes a CNC Editor, Backplotter and many other utilities and features. DNC Software is easily connected to CAD/CAM systems over industry standard networks and is available in a Client-Server configuration. Besides machine tool DNC communications, other shop floor data can be collected from shop terminals, tool pre-setters, bar code equipment or SPC systems.